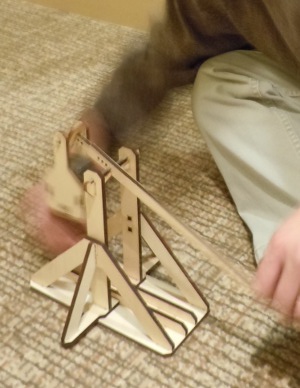 Who does not want to play with a trebuchet? A massive and powerful machine that fell castles and fortresses mysteriously. It takes many people to operate. When assembled, it lobs big boulders or fireballs over long distances. The movement, observed casually, seem magical. How can it work? No one knows.

Except for this kid obsessed with trebuchets. He built numerous trebuchets and figured out pretty much every detail. Then he entered this world-class technical university and met my kid. Years later, kid got a Christmas gift in the mail.

CalTech kids are pretty much all obsessed with one thing or another. One of them held the world-record for solving Rubik’s cube, blind-folded. Yes, he can do it blind-folded in a minute while I can only work out two layers in an hour. He lubricated his cube so that it will turn precisely a quarter turn with a slight flip of his finger. You don’t get to be world-record setting without paying attention to details.

Michael Woods crowd-sourced to fund his long-time hobby. Pledges from his Kick Starter project funded a laser wood cutter to mass produce miniature trebuchets (“trebuchettes”). Kid received her very own siege weapon as a gift. “Because he promised to build me one when we first met.”

Of course, I got to test its range and accuracy. More importantly, I now know how this medieval weapon works. You can try it too!

This entry was posted in Peek into my mind. Bookmark the permalink.