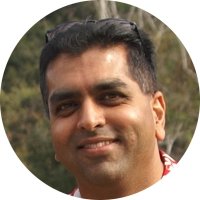 I met Samir, 1993, at Kubota Pacific, the afterlife of Ardent Computer, an ambitious project to make super-computing workstation. Samir was the compiler head for Ardent. When Kubota acquired Ardent and launched the grandeur plan to become the dominant player in the computing industry in 50 years, Samir became the engineering director. The troika of Samir, John Loveall, and Jeff Friedberg jointly govern all software development efforts. I was one of their managers.

Samir was young, single, and radiant. He was active in the dating scenes (well admired, but not womanizing), practiced flying on weekends, had good grip on technologies and management. The world was in his hands and looking good too.

Kubota faltered then collapsed. People scattered. A few years later, John called from Adaptec and I went working for him again. Samir was also working for Adaptec, on the “optical” side, a different business unit altogether. I stopped by to chat and we went on with our lives.

Roxio, the part Samir worked for, spun off and went public. Samir’s became a VP. But a dark political maneuver ousted him. Escaped to Sun earlier, I recruited and then witnessed his patience through 4 turbulent years of reorganizations, mismanagement, and reductions-in-force. We lunched once or twice a year to catch up. Samir changed over these years. He settled down, got married, moved to Silver Creek (a.k.a. Atherton-south, an affluent community west of Milpitas), had 3 children, and went through some standard mid-life events that grayed his sideburns. Middle-age added to his charm, albeit with a bit wear and tear at the corners of the eyes.

He joined Innopath after I moved to Beijing and hired several Sun employees, including someone in China. That was a strange project that we designed someone’s career together, across two companies. We talked frequently, held little back, usually for hours, and easily diverted and distracted. I always enjoy capturing a gleam of his wit and genius for people from time to time. We have many overlaps in life values and career paths. We also have lots to share: life experiences, gadgets, travel tips, etc.

He just told me about his new job. I thought of all these years and how our friendship evolved. A blog to commemorate the occasion seems appropriate.

This entry was posted in Witness to my life. Bookmark the permalink.